The founder of Aikido was Master Morihei Ueshiba (1883-1969). He created Aikido as a path to universal harmony and world peace, believing that Aikido was a way of attaining this goal and that violence and aggression could be turned aside by harmony of spirit. Although invincible as a warrior, he was above all a man of peace who detested fighting, war, and any kind of violence. His way was Aikido, which is known as the “Art of Peace”. Morihei Ueshiba is known to Aikido students everywhere as O-sensei, ‘Great Teacher’.

Morihei Ueshiba sought out and studied under masters in many traditional martial arts, eventually becoming expert at a number of styles of jujutsu (unarmed combat), kenjutsu (fencing) and sojutsu (spear fighting). As his reputation grew, O-sensei opened his first full-size aiki-budo dojo in 1931 in Tokyo. Students came from all over Japan to train with him. During World War II he moved to Iwama in Ibaragi prefecture to farm and study in peace. He opposed Japan’s participation in the war. During this period O-sensei was inspired to rename his art “Aikido”. 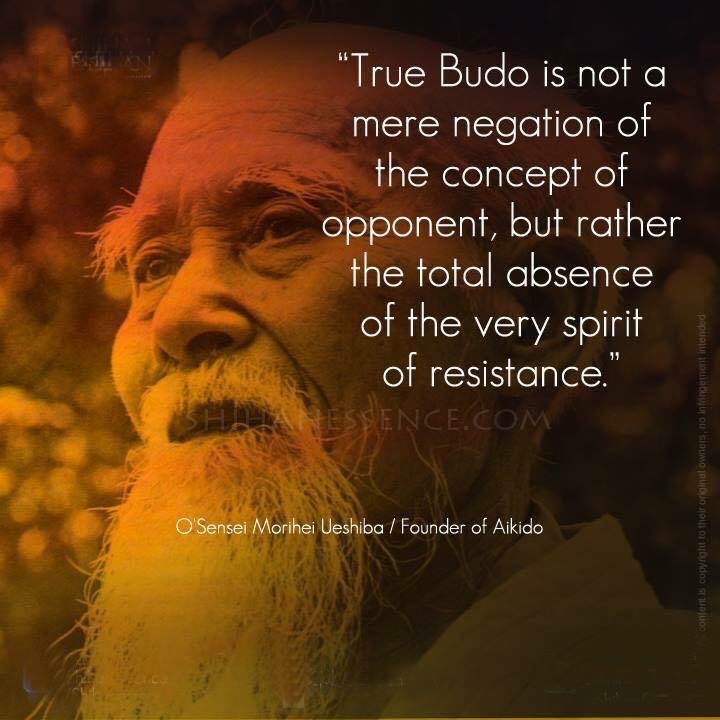 Dissatisfied with mere strength and technical mastery, O-sensei also immersed himself in religious and philosophical studies. O-sensei understood that continued fighting -with others, with ourselves, and with the environment – will destroy the earth. He said: “The world will continue to change dramatically, but fighting and war can destroy us utterly. What we need now are techniques of harmony, not those of contention. The Art of Peace is required, not the Art of War”.

O-sensei taught the Art of Peace as a creative mind-body discipline, as a practical means of handling aggression and as a way of life that fosters fearlessness, wisdom, love and friendship. He believed that its principles of reconciliation, harmony, cooperation, and empathy could be applied bravely to all the challenges we face in life: in personal relationships, in business, and in our interactions with nature. 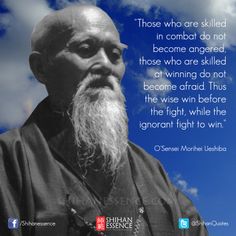 O-sensei continued to practice and teach Aikido into his old age. Observers would marvel at his abilities, vitality, and good humour; he was still giving public demonstrations of Aikido at 86, four months before his death. O-sensei’s approach to self-development was intense and unflagging. He constantly refined his art. Just before his death he said, “This old man must still train and train”. After he passed away on 26 April 1969, the Japanese government declared Morihei Ueshiba a Sacred National Treasure of Japan.

The secret of Aikido is to harmonise ourselves with the movement of the universe and put ourselves in accord with the universe itself. He who has penetrated the secret of Aikido has the universe within him, and may truly say – “I am the universe”.
I am never defeated, however quickly the enemy may attack me. This is not because my technique is quicker than my enemy’s attack. It is not a question of speed. The fight is over before it has even started.
When an enemy tries to fight with me, the universe itself, he must inevitably shatter the harmony of the universe. At the very moment he decides to fight me, he is already beaten. There is no measurement of time – neither fast nor slow.